Visibility from warehouse floor to store

Massdiscounters heads up the two retail chains Game and DionWired and is a subsidiary of JSE-listed Massmart Holdings. Massmart is Africa’s third largest distributor of consumer goods, a leading retailer of general merchandise, liquor and home improvement equipment and supplies, and the leading wholesaler of basic foods. Massdiscounters operates outbound logistics from three regional distribution centres to 140 Game and Dion Wired stores.

The organisation was working with an execution management system that wasn’t meeting their management, visibility and analytics requirements. Business was increasingly frustrated with poor visibility and the inability to manage stakeholders in the delivery execution process – including 3PL providers, warehouse operations and stores.

A solution was needed hat would not only deliver traceability and trackability tools for seamless management and control, but that would also provide analytics to enhance business insight and decision-making capabilities.

“We needed a system that would help us to understand execution problems accurately and thereby allow us to address them effectively,” explains Marcus Vosloo, Massdiscounters national transport services manager.”

To address the challenges around driver visibility, data analysis and management and control, Massdiscounters implemented the Trackmatic Driver-Led Visibility solution. With customisable feature sets and a rich toolkit that delivers improved accuracy, driver visibility, realtime monitoring, and accurate insight and detail into daily operations, it was the good fit for the problems facing the organisation.

“This technology has allowed us to become more efficient in our data usage and more proficient in our data applications,” says Vosloo. “The Trackmatic BI (business intelligence) design means that we don’t really have to touch the data to get what we need out of it.”

The system allows the teams at Massdiscounters to gain insight into driver behaviour and delivery processes. Using the system, the operations team has optimised deliveries by improving truck utilisation, with faster turnaround times and increased the volume of deliveries per day.

The can also prepare stores for deliveries in advance by using the advanced e-mail notification system. Store managers are alerted to the impending arrival of a delivery and can prepare for the delivery, improving offloading times.

The system is designed to be as easy to use as possible, allowing drivers to gain all the benefits of the solution without a steep and complicated learning curve. The result is that the drivers have been enthusiastic participants in the roll-out of the new system.

Sunnyboy Mathibela, a driver for Massdiscounters driver, comment: “As drivers we are now tracked from leaving the yard – they check what time you leave the gate until you reach the customer. The company can see you have arrived so they can call the store and let you know that you’re waiting outside.”

Trackmatic provided Massdiscounters’ drivers with comprehensive training and support. This ensured that they were comfortable with the process from the start, allowing them to see how they were the true front of the business.

“Understanding the invaluable role that the driver can play is incredibly important and opens up the channels of communication for better real time, proactive engagement between drivers, customers and the business,” says David Slotow, CEO of Trackmatic. “Education is essential to the success of this solution and underscores the drivers value and gives them important technology skills that they may never have had the opportunity to learn before.”

Having Trackmatic means that stores are aware of where their deliveries are and when to expect the drivers, Vosloo explains. “This has meant that they send the trucks back to us faster as well. No spending hours on unnecessary paperwork.”

The solution has also allowed for the teams to instantly identify problems on a route or with a delivery and find quick fixes to resolve them. The visibility into driver behaviour means that Massdiscounters knows how long a driver takes to get somewhere, to offload, and to come back to depot for the next trip.

The use of dashboards has also allowed them to gain instant insight into where their shortfalls are, giving them more direction and the ability to focus on key areas.

Massdiscounters has good engagement on the platform. Teams have a route activation score of close to 80% – this score dictates how often the teams open a route on departure and close a route once delivery is complete.

Thanks to this level of engagement, Massdiscounters has experienced positive shifts in its KPI scores and has gained incredible visibility into fleet movement, delivery status and driver capability.

The system is tailored to the customer’s specific requirements – a target of 80% is required across all parameters – such as routes departed on time, routes returned on time, distance adherence, duration adherence, and more.

Massdiscounters’ commitment to using the intelligence provided by the BI tool has shown how it can have a noticeably positive effect on performance.

“It’s not something that happened by accident, we worked with the Trackmatic team to create a customised solution that has done more in the first month of installation than we achieved in the three months prior,” Vosloo says.

In addition, driver attitude and behaviour has shifted. Drivers feel empowered and inspired, as if they are a part of something important, and their contribution means something. Throughout the implementation process they were made to feel as if they were front and centre, and it paid off.

“By giving drivers a voice in the industry we are breaking a lot of norms,” says Slotow. “We have changed the face of what’s possible when it comes to the logistics space and closed a lot of gaps when it comes to customer relationship management. Now, every part of the supply chain is playing a role in delighting customers.”

Since implementation of the Trackmatic solution, Massdiscounters has executed more than 8 920 routes, with 199 distinct drivers using 61 distinct vehicles and visiting more than 9 143 stores in the last quarter alone.

There was a 14% increase in driver key performance indicators – a measurable requirement from Massdiscounters on implementation – and impressive savings on fuel, productivity and time. 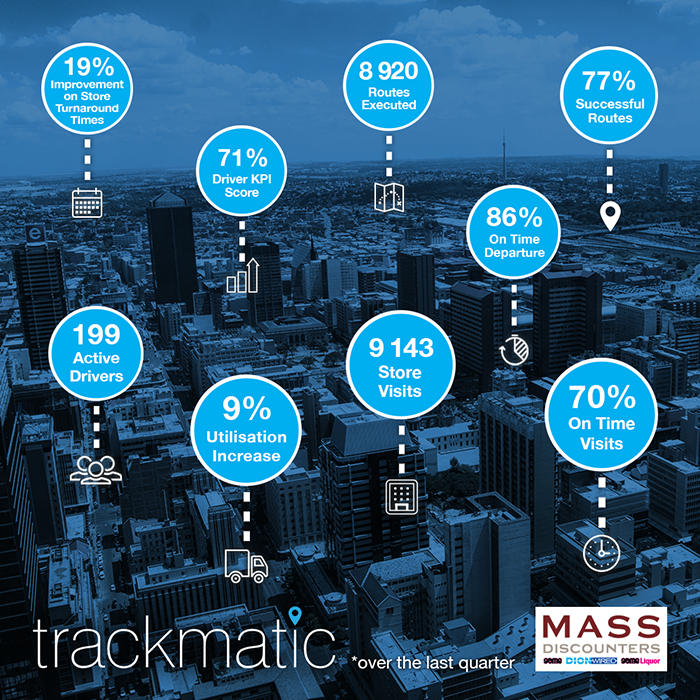