Nevertheless, this British racer was one of the best, beating both Ayrton Senna and Michael Schumacher in close-fought competition. His Le Mans win and World Sports Car Championship crown with Jaguar add to his stature.

Today, thanks to the power of television, he is probably better known for his role behind the Sky Sports TV microphone than he was during his racing heyday.

I met Martin when we were competing in Formula Ford 2000, a junior single-seater formula, in England in 1980. We had both opted for Reynard chassis – a mistake as it turned out as the cars were uncompetitive.

Martin quickly moved on, racing saloon cars. I returned to South Africa to compete in the local Formula Atlantic series, graduating to sports cars and that memorable all-South African win at the Daytona 24-Hour race in America in 1984.

Martin was promoted by the legendary Tom Walkinshaw to race alongside another legend, Stirling Moss, in a two-car Audi team to contest the British Touring Car Championship. Martin was just 21, and Stirling, at the end of his career, was 51.

Martin soon reverted to single-seaters – and returned to the path leading to F1. He grabbed an opportunity to race in British Formula 3, an accepted F1 feeder series.

In his second race, he started from pole position and won by half a lap. He was on pole for every race for the rest of the 1982 season.

The following year, his main competition came in the form of future star Ayrton Senna. Their fight for the F3 title is well documented. The Brazilian won, but by the slimmest of margins.

Both drivers graduated to F1. Senna’s career took off while Martin’s moved at a more pedestrian pace with him racing in the mid-field for uninspiring outfits like Zakspeed and Ligier.

It was Walkinshaw who helped Martin secure a drive with the Jaguar sports car team in 1988. He won five of the 10 rounds, to be crowned World Sports Car champion. He also won the Daytona 24-hour race that year.

Over the following three years Martin dovetailed F1 and sportscar races, winning Le Mans in 1990 for Jaguar. He did Le Mans again four times between 1997 and 2001, for Nissan, Toyota and Bentley.

Walkinshaw, together with (then) Jaguar designer Ross Brawn, were the catalysts in getting Martin into a competitive F1 seat in 1992, as team mate to another emerging star, Michael Schumacher at Benetton.

“’Schuey’ always out-qualified me, but sometimes I out-raced him,” says Brundle.

Poignantly, the Monza podium that year featured Senna, Brundle and Schumacher – in that order.

After another stint at Ligier, a call from McLaren saw Martin on the podium again with a fine second place at Monaco in 1994. Unfortunately, McLaren’s decision to opt for Peugeot power kept it down the order on power-hungry circuits – much as it did with Honda power in 2017.

With so much experience Martin was a natural to be drafted in to commentate on F1. His first opportunity came in 1989, partnering celebrated F1 pundit Murray Walker in the BBC booth. His performance was widely acclaimed and part-time roles, when his racing schedule allowed, continued.

When he effectively retired from F1 after the ’96 Japanese GP Martin signed to commentate for ITV, who were taking over F1 coverage from the BBC. He worked with James Allen and Jonathan Legard and now partners David Croft at Sky Sports TV.

Martin’s competitive spirit surfaced again in 2011 when he came out of retirement to race at Daytona, sharing a drive with Zak Brown, Mark Patterson and Mark Blundell; they finished fourth.

Martin also competed at Le Mans the following year, teaming up with son Alex. They finished a creditable fifteenth overall. 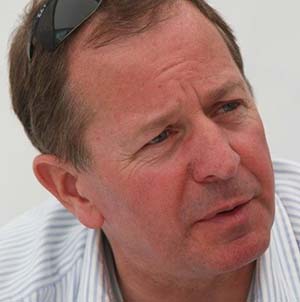 In a commentating career spanning more than two decades Martin has been showered with plaudits, including the Royal Television Society’s Sports Pundit award which he was won multiple times.

His sharp, informative and insightful reading of each race is exceptional, underpinned by his experiences of the challenges associated with F1 – and his insights into how the F1 circus really operates.

The Times describes him “as the greatest TV analyst in this [F1] or any other sport”.