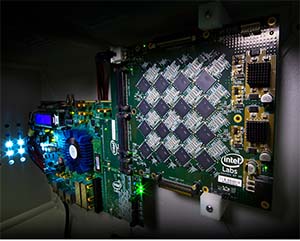 With Pohoiki Beach, researchers can experiment with Intel’s brain-inspired research chip, Loihi, which applies the principles found in biological brains to computer architectures.

“We are impressed with the early results demonstrated as we scale Loihi to create more powerful neuromorphic systems,” says Rich Uhlig, MD of Intel Labs. “Pohoiki Beach will now be available to more than 60 ecosystem partners, who will use this specialized system to solve complex, compute-intensive problems.”

With the introduction of Pohoiki Beach, researchers can now efficiently scale up novel neural-inspired algorithms – such as sparse coding, simultaneous localisation and mapping (SLAM), and path planning — that can learn and adapt based on data inputs.

Pohoiki Beach represents a major milestone in Intel’s neuromorphic research, laying the foundation for Intel Labs to scale the architecture to 100-million neurons later this year.

Continuing the gains in power and performance enabled by Moore’s Law will require more than continued process-node scaling. As new complex computing workloads become the norm, there is a growing need for specialized architectures designed for specific applications.

The Pohoiki Beach neuromorphic system demonstrates the benefits of a specialized architecture for emerging applications, including some of the computational problems hardest for the internet of things (IoT) and autonomous devices to support.

By using this type of specialized system, as opposed to general-purpose computing technologies, we can expect to realize orders of magnitude gains in speed and efficiency for a range of realworld applications, from autonomous vehicles to smart homes to cybersecurity.

In 2017, Intel introduced Loihi, its first neuromorphic research chip. In March 2018, the company established the Intel Neuromorphic Research Community (INRC) to further the development of neuromorphic algorithms, software and applications. Through INRC, Intel provides access to its Loihi cloud systems and Kapoho Bay, a Loihi-based USB form factor system, which has invigorated research on real-world applications for neuromorphic technologies.

The announcement of Pohoiki Beach accelerates this effort by providing greater computational scale and capacity to Intel’s research partners.

Later this year, Intel will introduce an even larger Loihi system named Pohoiki Springs, which will build on the Pohoiki Beach architecture to deliver an unprecedented level of performance and efficiency for scaled-up neuromorphic workloads.

Intel’s engineers expect that measurements from these research systems will quantify the gains that are achievable with neuromorphic-computing methods and will clarify the application areas most suitable for the technology. This research paves the way for the eventual commercialisation of neuromorphic technology.