Dynabook Europe has announced two new laptops, the Portégé X30-F and the Tecra X40-F, the first to be dynabook-branded in Europe following the rebrand of Toshiba’s computer business in April of this year. 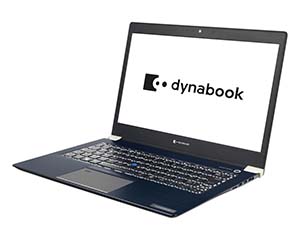 The new laptops are elegantly designed with a range of features to provide seamless connectivity and reliability. They benefit from Modern Standby, the latest 8th Generation Intel Core processor (Whiskey Lake), and newly added Intel Optane Memory, and boast new upgrades including a hardware precision touchpad (PTP) with wake on fingerprint capabilities. In addition, a newly designed fan improves airflow and cooling by lowering fan noise.

The latest generation models of Portégé X30-F and the Tecra X40-F are equipped with Windows 10 Modern Standby (MS), an evolution of the Windows 8.1 Connected Standby power model that enables the smartphone power model on a PC, which in partnership with the ‘wake on fingerprint’ feature provides the instant on/off experience that users have come to expect of their mobile devices.

Whereas Connected Standby devices stay up-to-date whenever a suitable network is available, the Modern Standby PC uses any available network connection – WiFi, mobile broadband (MBB)/cellular, or wired Ethernet to remain always on and connected to the internet taking advantage of the S0 low power idle model to limit network activity while in a low power state.

Further improvements for both the Portégé X30-F and the Tecra X40-F devices include WiFi 6 the latest standard providing faster WiFi with more capacity. This next generation of WiFi, based on the 802.11ax standard, is the next step in wireless connectivity that will bring blazing fast and responsive connections and the capacity to handle dense hyper connected environments.

Another key evolution in the devices is the new S-Type fan. This new fan has been developed to provide an improved cooling effect (air volume increased by 10%), while lower rotation speed results in quieter operation.

The Portégé X30-F and the Tecra X40-F devices are designed to meet the highest standards for security. In addition to their in-house developed BIOS and TPM 2.0, these models support advanced security features such as Secure Launch protection and System Management Mode protection.