Economics of nature: mapping an ecosystem exposes its value

Conservation scientist Trond Larsen and his team trekked through a remote forest in Liberia, recording the plants, animals, and insects that they saw. They noted whether the forest was intact or degraded. Far above their heads, NASA’s Earth-observing satellites collected data about the terrain as the satellites continued their well-travelled orbits over Africa.

The data collected by the team and the satellites will be used by the Liberian government and the global non-profit Conservation International to factor the country’s natural resources and ecosystems into its economic planning. This process is known as ecosystem accounting and helps to meet the standards outlined in the United Nation’s System of Environmental-Economic Accounting (SEEA). 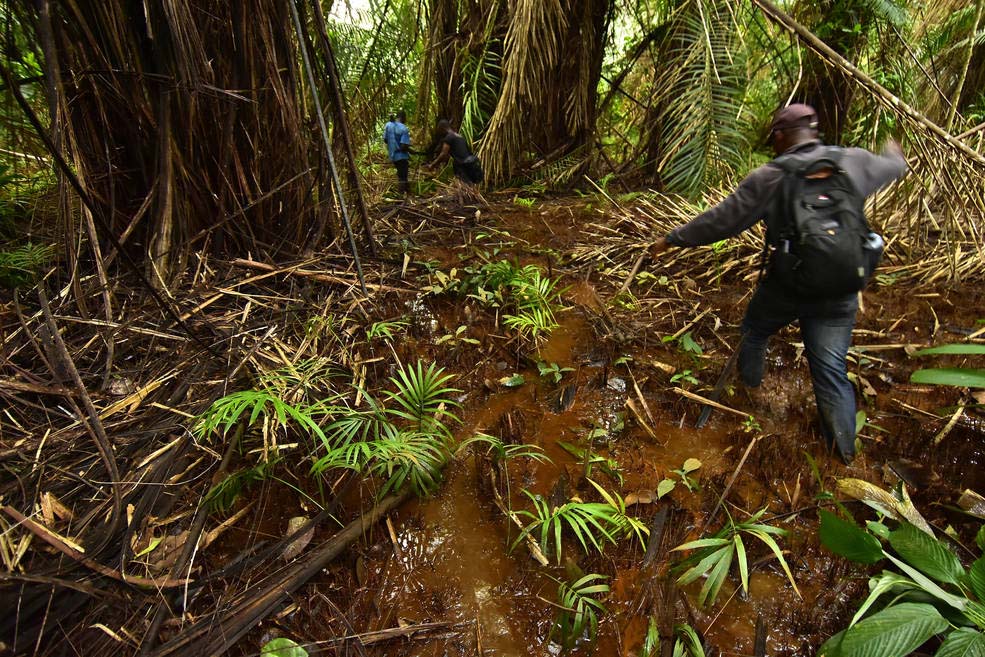 This project supports the goals of the Gaborone Declaration for Sustainability in Africa that includes 18 African countries, including Liberia, committed to ecosystem accounting for their natural resources and ecosystems. The project is a joint effort between NASA, Conservation International, and the Liberian Government through the Environmental Protection Agency (EPA) to pilot an innovative and replicable approach to more accurately map ecosystems to support effective planning and sustainable decision-making. NASA’s satellite data and expert analysis will provide a country-wide picture of Liberia’s hardwood forests, mangroves, and other ecosystems; Conservation International and the Liberian Government through the EPA will augment that data with their expertise in ecosystem accounting, field studies, and local knowledge to quantify the value of the country’s natural resources and related ecosystem services. The project is focusing on Liberia for now, with plans to move on to Botswana and Gabon in the future.

“The problem is that we don’t consistently know the value of ecosystems in Sub-Saharan Africa, and countries can’t plan for and manage what they can’t measure,” said Daniel Juhn, Vice President at the Moore Center for Science at Conservation International. Taking stock of the country’s natural resources is the first step toward identifying the natural capital – or value – of those resources, he says, which could improve conservation efforts.

Assigning an economic value is easier for some ecosystem services than others. For example, coastal mangroves provide firewood for cooking and smoking, as well as habitat for fish, mollusks, and shrimp. However, mangrove forests also protect coastal communities from extreme weather, bring in revenue from eco-tourism, and store enormous amounts of carbon in the soil, roots, and the trees themselves. Those services are much harder to quantify.

To ensure adequate ecosystem accounting, scientists and conservationists need maps detailing the types of land cover that exist in Liberia and their locations. That’s where NASA comes in.

The NASA research team, co-led by research physical scientists Lola Fatoyinbo and Chris Neigh along with associate research scientist Celio De Sousa in the biospheric sciences lab at NASA’s Goddard Space Flight Center in Greenbelt, Maryland, has made land cover maps of the entire country using images from the joint NASA and United States Geological Survey’s Landsat mission. The skies above Liberia are often cloudy enough that satellites can’t get a good view of the land below, so De Sousa had to find cloud-free images of each area, then use computer programs to overlap and stitch them together to make a mosaic of all of Liberia.

De Sousa made a landcover map for every year in the last two decades. This timeseries allows researchers to see how human activities and natural processes have changed the Liberian landscape. It will also give the Liberian government the information needed to determine how changing land from one type to another – for example, converting an old-growth forest into a palm oil plantation – will impact the country’s economy and biodiversity.

“We’re essentially translating the ecosystem into a sector of the economy so that countries can plan more effectively and sustainably,” explained Juhn.

Liberian government officials will be able to use this information to understand the impacts of various infrastructure projects or the cost of land conversion. The information will also help identify opportunities and determine how much funding to allocate for things like forest protection in order to adhere to the standards outlined in the new SEEA guidelines, which will be released in 2021.

“The goal is to hand off what we’ve produced to these countries so that they can continue doing ecosystem accounting,” said Neigh.

The project capitalizes on existing data from NASA and others that is easily accessible in Google Earth Engine, allowing the Liberian government to continue factoring ecosystems into their accounting each year. The partnership also intends to help Botswana and Gabon implement similar systems in the future.

Feature pic: Wildlife habitats are an important factor in determining the importance and natural capital of an ecosystem.