It was with the saddest of hearts that we heard last month that Mark Perry, one of the true gentlemen in local IT and the channel, had lost his brave battle against cancer. Deep Throat’s sincere condolences go out to his family and his many friends in the industry.

We first met Mark many years ago when he was appointed channel manager at HP and will never forget what became his standard response whenever we telephoned him with a query: “What trouble are you getting me into today?”. Invariably, the conversation would end with a few hearty chuckles and, as soon as he could, he would always call back with a response, either a statement, a soundbite or, sometimes, a sighed “No comment”. But the good times we had through the years far outweighed the bad and his impish grin whenever we met will be sorely missed.

He was with us the first time we ever went through the trauma of lost luggage on an international trip. An HP conference to San Francisco. Ever the perfect host, Mark held up the rest of the touring party on the bus outside as he waited with me for a response from the airline. Eventually, I persuaded him to get the rest of the South African delegates to the hotel and that I would catch a taxi there. Reluctantly, he finally left me at the lost luggage counter … but not before pressing the cab fare into my palm. And he met me as I arrived at the hotel, warm smile and cold beer in hand to cheer me up.

Like we said, lots of great memories. But arguably the most enduring one is from a golf day at Pezula down in Knysna. Mark loved his golf and this event turned out to be the only time we ever played with him. At the course’s famed signature hole, a par three on the edge of cliffs overlooking the ocean, everyone in the four-ball landed their balls within inches of the pin. Mark led the way and his wily encouragement as the rest of us prepared to tee-off was acknowledged by us as the reason for our great shots. The wild high-fives and hugs on the green as we all birdied – again with Mark’s astute guidance and reading of the putting surface – would probably have sent shivers through the club’s establishment but, in that moment, we didn’t care. We finally went on to win the tournament and the cigar humidor we were presented with still holds pride of place on the corner of Deep Throat’s desk. A daily reminder of a great day … and a great, encouraging and patient gentleman.

A good few years ago, Mark left HP to join Aptronics and was never happier. “I should have made this move years ago,” he once confided. He loved the company, the people, and the role he played within it. Even after being diagnosed with cancer, he continued to play his part for as long as he could as the company went through its acquisition by EOH.

A fighter to the end, Mark compiled a bucket list of things he wanted to achieve before the dread disease took its toll. And, as far as we know, he completed the list before he was cruelly cut down. More testament to the larger-than-life character of the man.

Mark, it only remains for Deep Throat to swallow … this huge lump in our throat as we write this … and to toast the absolute pleasure it was to know you with a cold one. We know that you would clink glasses with us … and that your trademark smile would broaden into the all-encompassing grin we all knew and loved.

WestconGroup SA has appointed Rakesh Parbhoo as its new CEO, effective from 1 August. The contract of Guy Whitcroft, who has acted as interim CEO since last year, expires at the end of May and Jeremy Butt, EVP of Westcon EMEA, says that “an interim management team of Andries Coetzee, Elmien du Toit, Uwe Brandkamp and Robyn Newel will manage the business during the short period between Guy’s departure and Rak’s arrival”.

In an announcement to staff, Butt says: “Rak is currently the Chief Information Officer for Dimension Data Middle East & Africa, a position he assumed in July 2016. In this role, Rak is responsible for Dimension Data MEA’s information systems strategy to support its business objectives and goals.

“Rak joined Dimension Data in 1998 as a product manager responsible for the Cisco Systems product suite. He subsequently held a number of positions in sales and services management. In 2006 he was appointed Managing Director for Dimension Data East Africa following the purchase of an existing business. He transformed the business into one of East Africa’s leading IT services companies. Subsequent to this he was appointed as the Executive for Emerging Markets, responsible for Dimension Data’s operations outside of South Africa, across Middle East and Africa.

“Rak graduated with a BCom degree majoring in insurance, risk management and information systems from the University of the Witwatersrand, South Africa, in 1997. He subsequently completed a Management Development Programme through Manchester Business School, and was selected for the Global Leadership Development Programme through the Gordon Institute of Business Science.

“The search to find Rak has been very long and very structured,” Butt says. “I am very excited about his appointment and truly cannot wait for him to join the Westcon family.”

Rak, Deep Throat swallows … loadsa beer … wishes you everything of the best in your new job, and looks forward to sharing one with you in the near future.

The appointment of Rak Parbhoo as WestconGroup SA’s new CEO marks the end of Guy Whitcroft’s year-long tenure as interim CEO of the company. But, a little bird tweets in our ear, Whitcroft will not be lost to the local channel or IT industry. We’re reliably informed that while he may enjoy a bit of a sabbatical and continue with some of his studies, he will continue to offer consultancy services, where appropriate, and where the decades of his experience in distribution may be required. We’re sure he won’t be resting on his laurels for too long. As Westcon’s Jeremy Butt attested in a staff memo: “We appreciate Guy stepping into the CEO role at short notice and can honestly say that he has made a positive contribution to the business in a very short period of time. Please join me in thanking Guy for the value he has brought to Westcon SA and wishing him well in his future endeavours.”

Guy, Deep Throat swallows … more beer … and seconds Jeremy’s above sentiments. We look forward to sharing some of the amber brew with you in the near future. 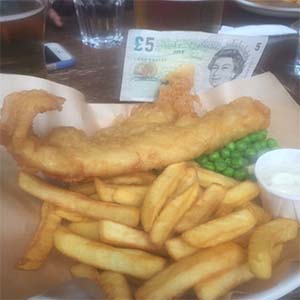 Pic of the Month: Fishy tale of the faded fiver

The British fish and chips may take centre-stage in this month’s Pic of the Month, but the real star of the story is the five pound note gently leaning against the half-full pint. It’s an “old” five pound note that was pulled from circulation on 5 May to be replace by a new plastic, more durable and more secure note. So what? I hear you cry, Dear Reader. Well … Esteemed Editor was scheduled to be in the UK on 6 May and, when he came across the old note in his moth-riddled wallet, wailed at the fact that “it was a pint down the drain!”. Yup, close to five pounds (4.85, to be precise – Ed) is what it will cost you for a glass of the amber nectar in the Big Smoke nowadays. Lamenting his five pounds’ fate, EE luckily stumbled upon an IBM friend who informed him they would be in London in time to use the note. Ever the generous one, EE gave the note to them on condition that they “spend it wisely”, preferably on a pint, and send him a pic. Hence this month’s contribution – and just as well. Taking a taxi on the day after the expiry of the note, EE confirmed with the cabby that he wouldn’t have accepted an old fiver. “You can change it at the bank for a new one,” he informed him. By the way, and for those that might be interested, about the only thing you could buy in a traditional London pub for a fiver is the pint. A glass of wine will cost you upwards of six pounds, and the fish and chips pictured, around 12 pounds. Work that one out with the rand exchange rate!