Deep Throat: behind the scenes in the channel

Ever wondered about the story behind the story? Or what’s really going on in the channel?

Whitcroft back in the saddle

In our haste last month to break the news of not only Thibault Dousson’s departure from HP, but also moves by AxizWorkgroup’s Brian Clarke, Rectron’s Lindi Shortt and Spencer Chen, and Pinnacle’s Dave McMurdo to Veritas, we left out one very important movement within the local channel. Deep Throat, Dear Reader, apologises. For those who don’t already know it, Guy Whitcroft, who can genuinely be described as one of the doyens … grandees … and other metaphors … of the industry, has resurfaced as interim CEO of Westcon-Comstor Southern Africa. Whitcroft, after stints in Dubai and the UK, finally returned to these shores just over a year ago and has been consulting to various companies from his Cape Town base. With incumbent CEO, Paul Conradie, temporarily side-lined by ill-health (we hear Paul is fast improving and wholeheartedly send our best wishes that this continues), parent company Datatec decided that a steady hand on the tiller during Paul’s recovery period would be the prescient path to take. We’d venture that they couldn’t find a steadier hand than Whitcroft with his decades of experience and no-nonsense approach to channel business. Especially in the current global and local economic conditions.

Guy, Deep Throat swallows … loadsa beer … wishes you everything of the best in your new role, and eagerly looks forward to catching up once you’ve settled.

Speaking of Thibault Dousson leaving HP, we also revealed in last month’s column that he was set to take on the role of regional GM of Lenovo vacated by Graham Braum following the latter’s promotion to a position within Lenovo EMEA. Despite not a peep coming out of either the local Lenovo office or its PR company, Dear Reader, we can confirm that the little twitterer who tweeted this news in our ear is 100% spot-on. Dousson will officially take up his new position in Lenovo’s Bryanston offices on 1 August. Our sister online publication, IT-Online, was looking to break the news first (we’re always glad of a scoop here at Deep Throat, no matter who the competition!), but our intrepid colleagues couldn’t get hold of Dousson for confirmation or comment. Seems his former company unceremoniously cancelled his cell phone contract mid-sabbatical, so he’s been uncontactable by both curious members of the hack brigade, as well as many of his friends and former colleagues. And here Esteemed Editor thought it was just another ploy to avoid having a beer with him!

PR Pric … Smile … of the Month: Better late than never … 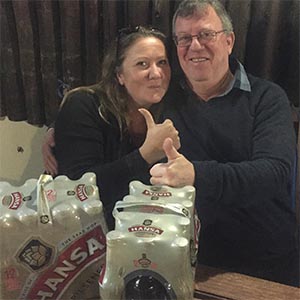 Bonus Pic of the Month this issue (Pic of the Year? Decade? – Ed) and a huge PR Smile rather than the traditional Prick(le). Well known IT PR outfit Anti-Clockwise’s boss lady, Charlene Carroll, kisses and makes up with Esteemed Editor after delivering a crate of his favourite tipple after a little bit of a faux pas. Seems EE dragged himself along to a presentation and cocktail do at one of Anti-Clockwise’s customers only to be shocked and dismayed when the seemingly well-stocked bar had none of his preferred amber brew. Apparently, though, it didn’t stop him putting a sizeable dent in the number of other beers that were available! Hissing an aside that he had been lured by a false promise that there “would be plenty of Hansa”, EE was dubious about C’s defence that she had double-checked with the caterer. The plaintive apologies of said caterer placated him to a degree as he glumly sucked on numerous green bottles. But being “old school” and a former hack herself, C knew just how to avoid possible troubled waters … not with oil … but with the pictured beverages. “Now that’s how to turn a PR Prick(le) into a PR Smile,” he beamed as he loaded his stash into the office beer fridge, and pre-empting Trusty Salesman with a stabbing glare. “And it’s for editors only, so stop licking your lips!”

But Deep Throat salutes you, C, and will swallow … as many of the beers that EE doles out to us … we know his bark’s worse than his bite!

Pic of the Month: We’re on the road to nowhere … 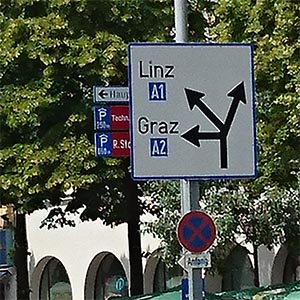 Thanks once again to intrepid colleague Kathy G for another snap on her recent trip to Vienna. Here in the dark recesses of Deep Throat’s offices, certain of us might complain about road signs that indicate place names we’ve never heard of due to the changing of historical city and town names (I know that Bela Bela is Warmbad! – Ed), but at least said towns are named. In this month’s contribution we have to wonder, if you’re not going to Linz or Graz and decide to take the third option, where are you actually going to? Sort of gives new meaning to that old Talking Heads classic “Road to Nowhere”, doesn’t it?