Deep Throat: Mustek group branches out … like we told you

In a piece in March under the headline “Old dog, new tricks” we hinted that the Mustek group was about to embark on an acquisition outside of its normal sphere of pure hardware and software distribution.

To be more specific, we actually printed: “… But Mustek is not resting on its laurels. Our little twitterer adds that there could be another acquisition on the cards in the near future – outside of its more traditional hardware arena. And the reliable word is that Lindi Shortt, the former MD of Rectron who left mid-2016, has been tempted back into the group fold to head up this new entity.”

As we always say, Dear Reader, read between the lines … and we love it when a tip comes to fruition.

This month, the group announced that Mustek sister company, Rectron has acquired a majority shareholding in ERP development company Palladium. In an official statement, Spencer Chen, MD of Rectron says that it is “… extremely excited about our investment in Palladium and making our mark in the growing South African software ecosystem. Palladium aligns well with Rectron’s strategy to grow its cloud and software business.”

Further down in the release, another old mucker of Deep Throat and MD of Palladium, Steve Corrigan is quoted: ““Until now Palladium has been regarded as South Africa’s best kept secret and we believe that our partnership with Rectron will help us to catapult Palladium in the South African channel through its broad base of resellers.”

As we said in our initial report, very reliable word on the street is that Lindi Shortt will return to the group to head up this new entity – “anything but distribution”, we believe were her words overheard by our little twitterer on the possibility of returning to the fold. We await the official announcement. Also, clarity on what role Corrigan, a vastly experienced executive in this specialised arena, will play in the future venture.

Either way, Deep Throat swallows … loadsa beer … and wishes both of them every success in whatever they decide!

It seems you can’t bump into anyone involved in the local channel nowadays without being confronted with the stock-same question: “What’s happening at Tarsus?” Over the course of the past couple of years, especially with former CEO Pierre Spies moving to the Pinnacle (sorry, Alviva) group, it was expected that a number of former execs and employees would follow in his footsteps. And quite a few have done so. But this month comes the news that one of the true stalwarts of the company, Jamie Scott, has decided to up sticks and replant them at Datacentrix, funnily enough, another Alviva subsidiary. Jamie has been at Tarsus for as long as Deep Throat can remember and was one of the most respected exco members at Tarsus. A further shock came when one of our reliable little tweeters informed us that not only had Scott left the company, but that on the same day, Jonathan Kropff, head of Tarsus on Demand had also tendered his resignation. Kropff joined the company a few years back when Tarsus bought the company he was heading up  – Cloud on Demand – and he was elevated to the position of cloud computing guru (or evangelist, as the purists say) for the group. No word, at this stage, on who will replace either of the two, but our twitterer says Anton Herbst, Tarsus’ chief strategy officer, is the temporary stand-in for Kropff.

So the question most frequently asked today in the channel would seem to have some credence: Just what is going on at Tarsus? We promise as always, Dear Reader, to try and find out by the next instalment of Deep Throat.

And for that matter … what’s happening at Pinnacle?

While questions might be posed about what’s going on at Tarsus, the same might be asked about what’s happening at rival Pinnacle, one of the main contributors to making Alviva the predominant distributor in the country. Via our reliable network of tweeters, we learned early this month of the departure of Greg Pothitos from Pinnacle. Another senior manager who left Tarsus after many years, Pothitos was instrumental in securing and building Pinnacle’s HP business. He’s now leaving them to join Lenovo where he’s been appointed as channel manager within Lorna Hardie’s Data Centre Group. Deep Throat looks forward to swallowing … loadsa beers, Greg, in the near future. But in the wake of Pothitos’ move, our little twitterer informs us that there have been more departures of senior figures at the company. Trevor van Zyl, who is as much a fixture at Pinnacle as the furniture, is also leaving the company. And, our intrepid ear-whisperer says, so is another veteran,  Max Stone. Again, no word – official or unofficial – on who the trios replacements will be. And again, Deep Throat commits to keeping you informed on updates as soon as we possibly can.

But nothing sinister in First Distribution move

In what seems to be a period of rapid movement – mainly of personnel, not upward trajectories – a final move within the channel we’re reliably twittered on. Tamzin Gray has left First Distribution to join Epson. At the time of going to press, all we had was that she was moving to Epson “to manage their Africa business”. We couldn’t confirm whether she is the elected replacement for former country manager Kelvin Reynolds or whether Hennie Crous will remain in that post. Deep Throat will have an update next month. 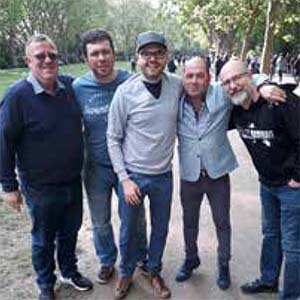 How many times have you used that above headline quote … Deep Throat knows we have … especially to colleagues lamenting the fact that they’re off to some conference or other in the UK and that the exchange rate is killing them? But here is the famous quote from Samuel Johnson in proper context: “… when a man is tired of London, he is tired of life; for there is in London all that life can afford.” Okay, sometimes London can be quite pricey, in particular when it comes to food and drink. I mean, a pint of our favourite amber fluid will set you back nearly six pounds? Fish and chips for 12 pounds? Do the maths on the exchange rate … Having said that, Esteemed Editor got a special treat when he recently visited England’s capital and got hold of old ex-pat mucker, Marcus Souror, just to meet for an expensive beer or three. Now heading up PR outfit Waggener Edstrom in the UK, Marcus surprised EE with an invite to the Fulham versus Reading Championship League play-off (it ended 1-1 and Fulham were knocked out in the subsequent away match). This issue’s Pic of the Month is courtesy of a passer-by who was more than obliging as we walked through the vast public park leading up to Craven Cottage. EE appreciated the break in the long walk as he and Marcus’ colleagues from the UK office of Waggener Edstrom duly obliged for the photo op. We didn’t ask how much the tickets cost, that would be rude. But just to back up Johnson’s famous quote, EE says that the park in itself, in its pre-summer glory was magnificent – and was open to all for free. As Johnson ended his quote: “ … for there is in London all that life can afford.”