Daniel Ricciardo rocked the Formula One firmament with his bombshell announcement of a move to the Renault team for 2019.

It was widely accepted that the Australian, who carries an image of the honey badger, his nickname, on his helmet, would re-sign for Red Bull.

It was a belief given added credibility by team boss Christian Horner who said only “small details” prevented a new contract from being inked by both parties.

The shock move brings to an end Ricciardo’s 10-year association with the Red Bull energy drinks company, one of the most prolific motorsport sponsors and owner of two F1 teams. 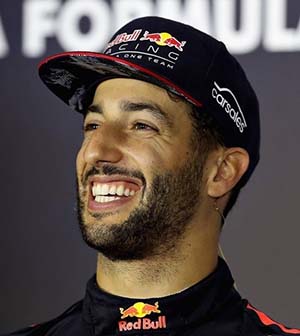 Ricciardo was given his first F1 break by Red Bull’s junior Toro Rosso team, at the “young drivers’ test” at Jerez back in December 2009, where he set the fastest time. Undoubtedly, it was a pointer to his burgeoning talent.

Until then Ricciardo had followed the well-trodden path to F1, via karting and junior single-seater formulae. It is a path littered with cast-offs who may have had the talent but not the backing or the luck to make it to the top.

Luck and talent were on his side. They came in the form of a scholarship to race in the Formula BMW Asian championship in 2006 – a reward for outstanding performances in an uncompetitive Formula Ford in the Australian championship.

In the Asian series he won twice and finished third in the title chase. His success led to more Formula BMW races, this time in Britain.

His achievements opened doors to a Formula Renault drive in 2007. It proved to be a learning year.

In 2008, however, his fortunes turned around and he won the Western European championship and finished runner-up in the Formula Renault Eurocup behind (now) fellow F1 driver Valtteri Bottas.

It all came good for Ricciardo in 2009 when he won the British Formula Three championship, as so many future F1 stars have done. Now, as a participant in the Red Bull junior drivers’ programme, his climb up the ladder quickened with a season in more powerful Formula Renault 3.5 cars for 2010.

He fought valiantly, but lost out in a last-race title shoot-out to Mikhail Aleshin.

Thanks to Red Bull, he was handed another F1 test, this time in Sebastian Vettel’s 2010 championship-winning Red Bull RB6. He was subsequently given the third (reserve) driver role at Toro Rosso for 2011.

In order for Ricciardo to gain race experience, Red Bull placed him with the Hispania Racing Team for the 2011 season. Sadly, few meaningful results were posted by this struggling Spanish outfit.

He had to wait until 2012 for a “proper” race seat, alongside Jean-Eric Vergne at Toro Rosso. Ricciardo scored two world championship points on his first outing in front of his home crowd at the Australian Grand Prix.

His dominance over his teammate in 2013 paved the way for him to replace the retiring Mark Webber at the senior team. He was to race alongside Vettel, now a four-time world champion.

Ricciardo impressed by winning the Canadian, Hungarian and Belgian GPs and out-pacing Vettel during the course of the year. Ricciardo was the only non-Mercedes driver to win in 2014. His performances earned him the Laureus World Sports Award for Breakthrough of the Year.

His battles to be competitive against growing opposition from Mercedes and Ferrari rivals are well documented. He won against the odds and scored impressive victories; notably at Monaco in 2018.

He also performed admirably against new teammate Max Verstappen, despite the youngster seemingly receiving a degree of preferential treatment. The growing sea of orange-clad spectators, waving orange-coloured flags and “Max Verstappen” banners at more and more race tracks around the world must seem like manna from heaven for the energy drinks manufacturer.

Each new Verstappen fan represents one less for its great rival Monster Energy who will be throwing additional weight behind Valentino Rossi, another global fan favourite, in 2019.

This probably prompted Ricciardo to search elsewhere for the support he needs for a future F1 title challenge.

Perhaps another reason for his departure is Red Bull’s switch to Honda power for 2019. This represents a step into the unknown. Will the partnership “gel”?

Is Renault a better, safer bet – particularly in the short term?