Axis has announced the 7th generation of its own Artpec chip, optimised for network video. The new chip will be the basis for the majority of Axis network video products in the future. 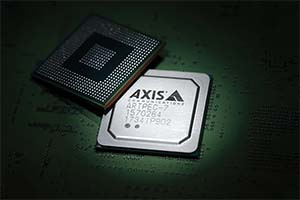 The new chip will power an array of new capabilities and features coming to Axis network cameras. These features include better imaging, enhanced security features, powerful compression and a possibility to run impressive analytics on the edge.

Since the chip is fully developed by Axis, it provides a layer of control that is crucial for effective cybersecurity.

One of the first cameras to include this chip is the Axis P1375.

Artpec-7 enables “built-in” security features for Axis cameras, including signed firmware so only secure authorized firmware can be installed, and secure boot, which prevents booting of unauthorised firmware.

Future Axis cameras will also let users choose between H.264 and H.265 video encoding depending on what best suits their system and surveillance needs.

The chip features a realtime object detection engine that will make it possible for Axis and Axis partners to develop analytics to automatically detect and differentiate between people, faces and objects.