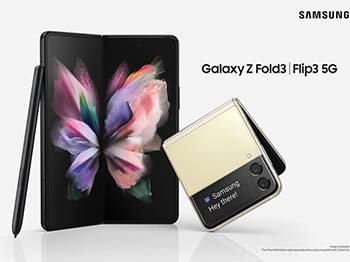 The Galaxy Z Fold3 is a multitasking device with a 7,6-inch Infinity Flex Display, and the first ever S Pen support on a foldable device.

The Galaxy Z Flip3 is compact and pocketable design, with enhanced camera features, and a larger Cover Screen built for quick use on the go.

The Galaxy Z Fold3 and Z Flip3 are equipped with IPX8 water resistance and built with new Armor Aluminium – the strongest aluminium ever used on a Galaxy smartphone – along with the toughest Corning Gorilla Glass Victus. In addition, both devices include a new protective film made of stretchable PET and optimised display panel layers resulting in a Main Screen that’s 80% more durable than previous devices.

The Hideaway Hinge, first introduced on Galaxy Z Flip, enables the devices to stay in place at any angle in Flex mode. Sweeper technology means the bristles inside the Hinge are now shorter, helping to repel dust and other particles. Galaxy Z Fold3 and Z Flip3 were also put through a strenuous folding test, verified by Bureau Veritas, to withstand folding 200 000 times.

Enhanced Flex mode features let users do more at once and Galaxy Z Fold3’s updated Multi-Active Window displays on the device’s large screen. Users can also create a shortcut and reopen apps in the same way later thanks to enhanced App Pair. Plus, they can use Galaxy Z Fold3’s new Taskbar to quickly switch between apps without returning to the Home screen.

Samsung is expanding partnerships with Google, Microsoft and others, so users can enjoy more of their go-to apps.