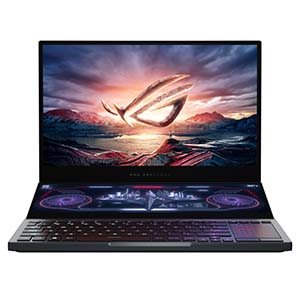 The ROG Zephyrus Duo 15 integrates two displays in an ultra-slim form factor to bring a new dimension of versatility to premium gaming laptops, without sacrificing any of the high-powered performance that defines ROG.

Multi-monitor arrangements enable gamers, creators, and power users to work more effectively on their desktops. Laptop users are also commonly seen using their phones as a second screen. To make that level of productivity portable, the Zephyrus Duo 15 doubles down on displays with an elegant Active Aerodynamic System (AAS) Plus design that makes the full-width ROG ScreenPad Plus touchscreen an integral part of the cooling system.

As the AAS Plus system tilts the laptop up, the second display also rises for comfortable viewing, while revealing a large air intake for deep airflow. The cooling design gives Zephyrus Duo 15 ample thermal headroom to fit powerful processors in a multi-screen gaming laptop.

Adding another display is no simple endeavor for ultra-slim gaming laptops, where every millimeter matters. The screen must be large enough to show useful information yet close enough to be within easy reach. 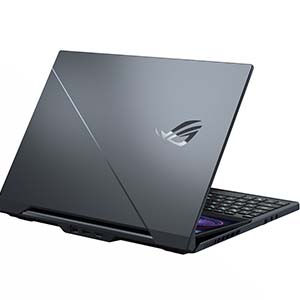 As the laptop is opened, ROG ScreenPad Plus tilts up at a 13° angle for comfortable viewing and touchscreen interaction. A custom hinge staggers the rise of the displays to prevent damage. To prevent the screens making contact as the lid opens, the hinge incorporates curved sliders that delay the deployment of the secondary display.

This allows users to boost productivity as the secondary display makes multitasking easy, and features optimised apps that enhance workflow. Users can keep chats and stream controls on deck while gaming on the main screen and enjoy a larger working area for creative projects with screen space to spare for critical tools.

When it comes to metagaming, users can enhance their game with tools that optimise play. Overlayed apps from Overwolf let them see real-time stats, build recommendations, and more.

While gaming on the main screen, users can stay engaged with team chats, streams, patch notes, browser windows, and more on the secondary screen.

Users can also keep broadcast controls, video feed, and stream chats on deck as they game. Optimised apps like Xsplit Gamecaster make it easy to produce a high-quality stream on the go.

For animation, users get more working space by moving their timeline, layers, and other contextual menus to the second screen.

The same goes for design, with users able to streamline content creation, from photo editing to 3D modeling, by keeping crucial commands within easy reach while they work.

The ROG ScreenPad Plus secondary display also doubles as a crucial component of the overall cooling system.

The original ROG Zephyrus optimised ultraslim laptop cooling with an Active Aerodynamic System (AAS) that opens a large intake vent as the lid is lifted. Different implementations of this design improve airflow by opening 7mm to 10mm vents that extend across the bottom of the laptop, but the Zephyrus Duo provides an opportunity to take things in another direction.

With AAS Plus, tilting the touchscreen at an angle opens a larger 28,5mm air intake, and allows the fans to draw in cooler air from above the laptop instead of warmer air from beneath it. This massive air intake increases airflow by up to 30% over previous AAS implementations, improving performance and putting less strain on the internal cooling system.

Decreased need for heat dissipation means that noise levels can be kept below 46 dB(A) in Turbo mode, and 43 dB(A) in Performance mode.

The display is factory calibrated and Pantone-validated to guarantee colour accuracy, but this particular panel also covers 100% of the Adobe RGB color space. The wide gamut and accurate colors let gamers who are also creators produce work at a professional level.

The primary display uses NVidia G-Sync technology to enable a uniquely engaging experience, when making use of your external gaming monitor. G-Sync synchronises the refresh rate with the frame rate to eliminate tearing, minimize stuttering, and reduce input lag.

A GPU switch exclusive to ROG lets users toggle between G-Sync and Optimus modes depending on whether they want smoother gaming or longer battery life, reinforcing this laptop’s innate duality.

The new NVidia GeForce RTX 2080 Super is fast and fluid: thanks to advanced cooling and ROG Boost, the GPU can hit peak clock speeds as high as 1330 MHz in Turbo mode.

Up to an 8-core 10th Generation Intel® Core™ i9 CPU hits speeds of 5.3 GHz on a single core, and can engage up to 16 parallel threads with Hyper-Threading technology to power through heavy duty tasks.

With up to 48 GB of combined onboard and SO-DIMM memory, Zephyrus Duo 15 is ready for multitasking mastery across multiple displays. Its DDR4-3200 RAM outpaces the old 2666 MHz standard, improving system speed and responsiveness.

Two NVM Express PCIe x4 SSDs run in RAID 0 to provide plenty of high-speed storage. The dual-drive array enables quick load times and access to data, and there’s up to 2TB of capacity.

USB Type-C with Thunderbolt 3 offers connectivity and means gamers can hook up to high-speed storage for ultrafast multimedia editing and transfers, speed up gaming and rendering by plugging into external graphics, daisy-chain multiple monitors to augment the integrated displays, or connect to a fully equipped desktop dock with the simplicity of a single cable. With peak theoretical interface bandwidth of up to 40 Gbps – 4X the speed of USB 3.1 Gen 2 standard – Thunderbolt 3 can balance multiple performance-hungry devices and drive external displays up to 8K resolution.

The CPU of Zephyrus Duo 15 is coated with Thermal Grizzly’s liquid metal compound instead of standard thermal paste. Improving heat transfer between the CPU and cooling module provides thermal margin that can be used to lower temperatures, reduce noise, or increase performance.

The cooling module snakes five heat pipes to draw degrees from the CPU, GPU, and surrounding power circuitry. Each of the four heatsinks is filled with ultrathin fins that maximise surface area for heat dissipation while decreasing resistance to airflow. Dual n-Blade fans circulate air with super-slim blades made of a special liquid-crystal polymer that’s strong enough to withstand high spin speeds. Thinner blades leave room to fit 83 per fan, increasing airflow by up to 17% compared to traditional designs. A mesh cover guards the fans against anything that pokes into the AAS vent.

Users can switch between operating modes on demand with a keyboard shortcut or automatically with Scenario Profiles.

To keep hands away from the warmest parts of the machine and create more space for ScreenPad Plus, the keyboard is shifted forward. The design lets wrists sit on the table, like with a desktop keyboard, and there’s a detachable palm rest to improve user comfort.

A handful of keyboard enhancements upgrade the input area below the touchscreen: the separated groups of function keys are easier to intuitively identify; dedicated hotkeys put volume and microphone mute within easy reach; ROG Overstroke technology lifts the actuation point of the underlying switches for a more responsive experience; multi-key inputs are more accurate thanks to n-key rollover that registers every press precisely; and the touchpad tucked neatly to the right of the keys lights up a digital numeric keypad with the press of a button.

Per-key RGB is great for highlighting critical commands and time-saving shortcuts. It can be used to streamline workflows or just coordinate RGB lighting across an ecosystem of Aura Sync peripheral devices.

The Zephyrus Duo 15 body is 20,9mm thin and weighs only 2,4kg. The magnesium-aluminide chassis is resilient, with all-metal construction and an anodised finish.

The devices has a high-capacity 90 Wh battery. It can also charge via USB Power Delivery, so users can take care of lighter work with a 65 W USB-C adapter that’s smaller than the standard unit required for full performance

The USB 3.2 Gen 2 port with Thunderbolt 3 supports Power Delivery and DisplayPort 1.4, and can be used to connect a G-Sync desktop monitor. There’s also an HDMI 2.0b output capable of driving a 60 Hz signal for 4K UHD monitors and TVs. Three Type-A USB ports accommodate additional peripherals, including a mouse, gamepad, and VR tracking.

Onboard speakers deliver have minimal distortion. Smart amplifier technology keeps the speakers within thermal and excursion limits, so the volume can be turned up higher without damaging the cones.